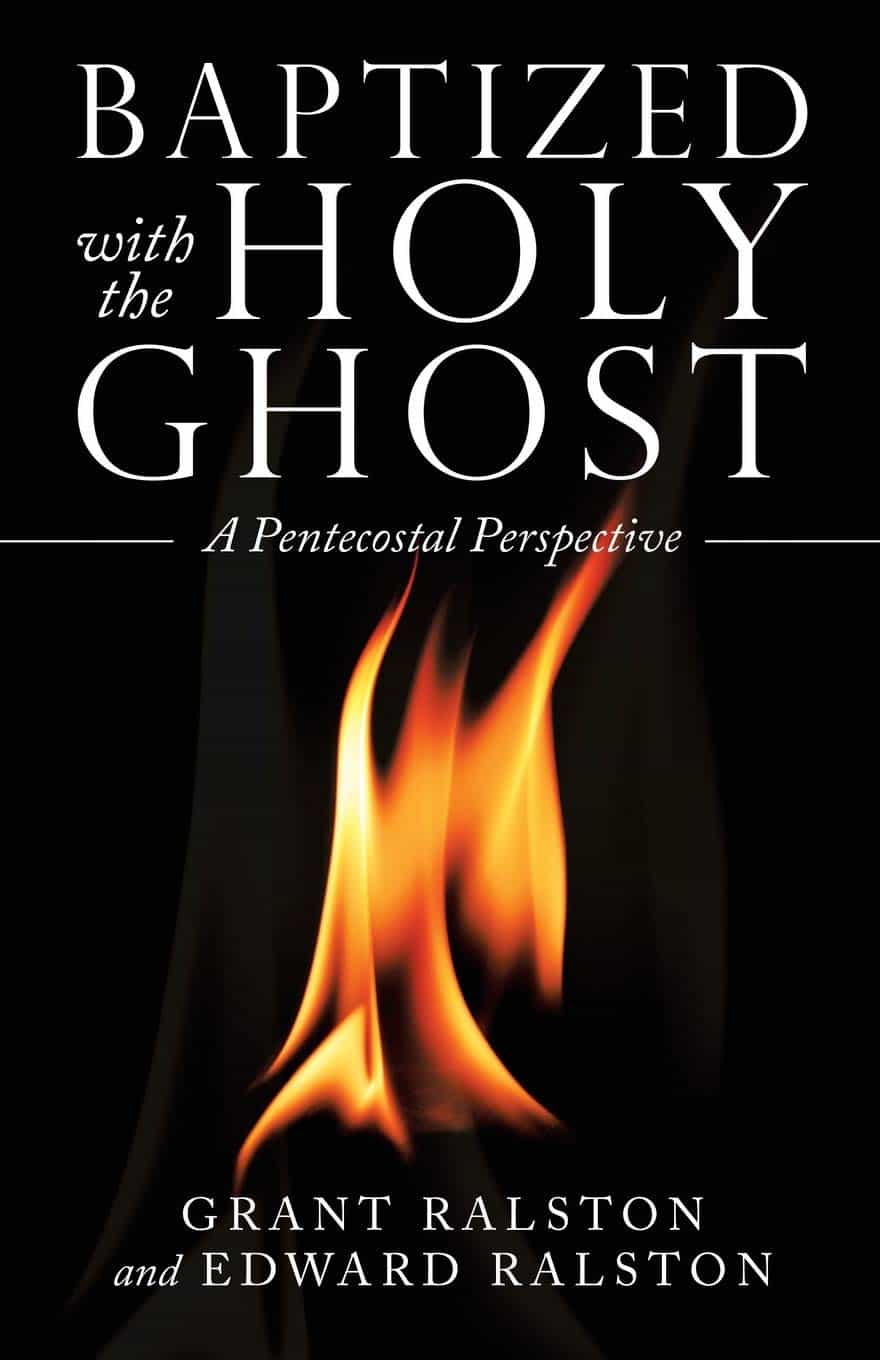 Grant Ralston has provided the following overview of the book he co-wrote with his grandfather, Ed Ralston.

My grandpa (Edward Ralston) and I have recently written a book entitled Baptized with the Holy Ghost: A Pentecostal Perspective. about our shared Pentecostal faith.

Specifically, the book explains in detail what Pentecostals believe about the baptism of the Holy Ghost. It is the purpose of this short article to summarize the contents of that book in the hopes that you will purchase it and benefit from it.

It must be admitted upfront that Pentecostals haven’t always done the best when it comes to the need for clear, biblical teaching about their doctrines.

Even though every Pentecostal I know upholds the authority of the Bible, many have sadly leaned more on experience than on biblical truth.

I don’t think that we should ignore our experiences. However, what I believe should be determined, first and foremost, by the word of God, which will then be confirmed by my experience.

In our book, we aim to give the Bible its proper place in formulating our teaching while our experiences of the Spirit’s presence and power validate what the Bible says.

In short, Pentecostals believe in “an experience of spiritual empowerment subsequent to conversion that is evidenced by speaking in tongues” (Baptized with the Holy Ghost, p. ix).

This definition has many parts that will be fleshed out in the remainder of this article, but it is important for you to understand that this is what makes a Pentecostal a Pentecostal.

Pentecostals are united in their conviction that (1) there is a post-conversion work of God (2) for the purpose of empowerment for mission (3) that is signaled by speaking in tongues. It would seem that a contradiction to claim to be a Pentecostal without upholding each of these three tenets.

Before getting into an explanation of these three parts, we must ask how Pentecostals come to believe what they do.

Simply put, Pentecostal rely heavily on the book of Acts to construct their understanding of what it means to be baptized with the Holy Ghost.

Many non-Pentecostals find fault with this approach, arguing that it is unacceptable to base doctrine off of “narrative” passages.

An example of this is John Stott, who wrote that “a doctrine of the Holy Spirit must not be constructed from descriptive passages in the Acts.”

However, this contradicts what the Apostle Paul wrote to Timothy:

“All scripture is given by inspiration of God, and is profitable for doctrine….” (2 Timothy 3:16).

Thus, all Scripture would include, by inference, the book of Acts, meaning that it is acceptable to construct a doctrine of the Spirit as Pentecostals do from Acts.

The first aspect to the definition of the baptism of the Holy Ghost is that it is a post-conversion work.

In other words, being baptized in the Holy Ghost (or any term that Luke uses as synonymous with this) is a work of God that comes after we are saved. Just because a person experiences the saving grace of Jesus Christ does not mean that he has received the gift of the Holy Ghost.

Of course, receiving Christ as his Lord and Savior is necessary for receiving the Holy Ghost, but the two experiences are not identical.

Perhaps the clearest example of this occurs in Acts 8. Because of the great persecution that came against the church in Jerusalem, Philip “went down to the city of Samaria, and preached Christ unto them” (8:4).

In short, his message was well-received by those who heard him. They believed what he said about the kingdom of God and Jesus and were subsequently baptized (8:13).

Quite clearly, the Samaritans had been converted under the preaching of Phillip. They were genuinely saved.

However, they had not yet received the Holy Ghost (8:15); the Spirit had not fallen on any of them (8:16). Once news reached headquarters in Jerusalem of the Samaritan’s reception of the word of God, they sent Peter and John to go lay hands on them and pray for them, “that they might receive the Holy Ghost” (8:15).

Luke, the author of Acts, succinctly notes what transpired once the apostles reached Samaria: “Then laid their hands on them, and they received the Holy Ghost” (8:17).

Thus, they received the Holy Ghost after they were converted.

In other words, the two experiences (conversion and the reception of the Holy Ghost) were not identical. They were separable. And, as John Wyckoff observes, “The fact Luke shows that the experience of the baptism in the Holy Spirit can be subsequent serves to underscore that it is a separable and distinctive experience.”

This leads to a second part of the Pentecostal definition of the baptism of the Holy Ghost, namely, that it is evidenced by speaking with tongues.

To demonstrate this, we will stay in Acts 8 for the time being. What constituted evidence that these Samaritans had received the Holy Ghost?

Luke records something very interesting: “… Simon saw that through laying on of the apostles’ hands the Holy Ghost was given” (8:18). In other words, Simon somehow knew that the Samaritan believers had received the Holy Ghost. How exactly did he know this? What did he “see?”

In agreement with many biblical scholars, we believe that Simon saw the Samaritans speaking in tongues and knew, because of this, that the Holy Ghost had been received.

One such biblical scholar, A. T. Robertson, observes that the phrase “when Simon saw” demonstrates “plainly that those who received the gift of the Holy Spirit spoke with tongues.”

Additionally, F. F. Bruce notes that “the context leaves us in no doubt that their reception of the Spirit was attended by external manifestations such as had marked His descent on the earliest disciples at Pentecost.”

Now, we argue in the book that speaking in tongues is the initial physical sign that a believer has been filled with the Holy Ghost.

There is a close connection between being baptized in the Holy Ghost and speaking in tongues. In the example of Acts 8, although tongues are not explicitly mentioned in the passage, they are certainly implied.

Pentecostals do not believe that speaking in tongues is the only sign of Spirit baptism.

We simply believe that it is the initial, physical indicator that a believer has been filled with the Spirit.

However, we also emphatically assert that there must be additional evidence that a person has received the Holy Ghost.

In the book, we mention a few: a greater passion for lost people, power for ministry and service, and an increase in joy.

In summary, if a person who has “spoken in tongues” does not manifest these additional signs, it is probable that he has not received the power from on high.

The final aspect to this Pentecostal definition is that the baptism of the Holy Ghost is primarily for empowerment for mission.

Sadly, many Pentecostals have also forgotten this fundamental purpose for why believers need to receive the gift of the Holy Ghost. It must be emphasized that this promised gift is for spiritual empowerment to be witnesses for God in his mission to reconcile a lost world to himself.

This becomes very clear at the beginning of the book of Acts: “Ye shall receive power, after the Holy Ghost is come upon you: and ye shall be witnesses unto me…” (1:8).

We can see that the power these early disciples were going to receive once the Holy Ghost fell on them was not so that they could live a victorious Christian life but in order that they could be God’s witnesses unto the ends of the earth.

Pentecostals must recapture this. If young people don’t know exactly why it is important to receive the Holy Ghost, they will be less inclined to seek this great Pentecostal blessing!

Once again, this article is a brief summary of our book Baptized with the Holy Ghost. It is by no means a comprehensive discussion of this essential biblical doctrine.

To obtain more information about the baptism of the Holy Ghost from a Pentecostal perspective, written by Pentecostals, I encourage you to purchase this timely resource.

In it, not only do we explain in greater detail what I have endeavored to summarize, but we also address relevant issues and questions related to our position, such as questions like: “Do all Christians have the Holy Ghost? Have tongues ceased? Do all speak with tongues (1 Corinthians 12:30)?”

I believe that everyone could profit from reading this book.

If you are a Pentecostal, you will be strengthened in your conviction for this post-conversion work of spiritual empowerment for mission.

Even if you are a non-Pentecostal (and maybe an anti-Pentecostal), you will benefit from Baptized with the Holy Ghost, because you will at least understand what your Pentecostal neighbor or friend believes.

Please note that the Amazon link provided here is an affiliate link, meaning we may be paid by Amazon for referring you to them.

I accepted Jesus Christ as my personal Lord and Savior in march of 1984. I was in the Navy at this time. It became my greatest desire to draw closer to God. Since that day I have been led by God's Spirit and the scriptures to live a life of Holiness. Holiness is not a bunch of rules, but rather it is the conviction and desire that I am pleasing to God in my life. These convictions are then what set the boundaries of my conduct and actions in life.

link to How Do I Become Holy

Once we have been converted, we are made Holy and begin to learn to express God's Holiness. day by day! "Holiness unto the Lord," is the established and therefore the eternal standard for every saint

Continue Reading
link to Why We Should Pray For America

The church must fervently seek Him as we have never sought Him before. If we don’t, we must prepare ourselves and our children to suffer the extremely adverse consequences that will take place soon

Within our society today, the term "Holiness" has simply become a general expression for a "Christian" life.

This "Christian" life is lived daily without much thought ever being given for what the word "Holy" really means.

Yet God commands us to be Holy, even as He is Holy.

He wants us to be Holy. He will make us Holy.

In order for this to happen, we all need to simply believe and obediently accept each word God has spoken.

It is our prayer that through the studying of the Word of God here, each one that reads these articles will come to the conviction that:

(2) There is Joy in being Holy

(3) There is great faith in living a Holy life.

Let's be what God has called us to be - Holy.

Have a question you would like us to answer? You can submit questions to us anonymously by clicking the Just Ask Button.

We would also love to hear any comments or questions you may have. You may contact us directly by emailing us at [email protected]

PRACTICAL HOLINESS, or more appropriately “PERSONAL HOLINESS” is where we walk our life as close to God as we are called by God to walk.  This applies first internally, then externally.

Here are a few observations that should be noted.

This is why God instructs us to “Be ye holy; for I am holy.”