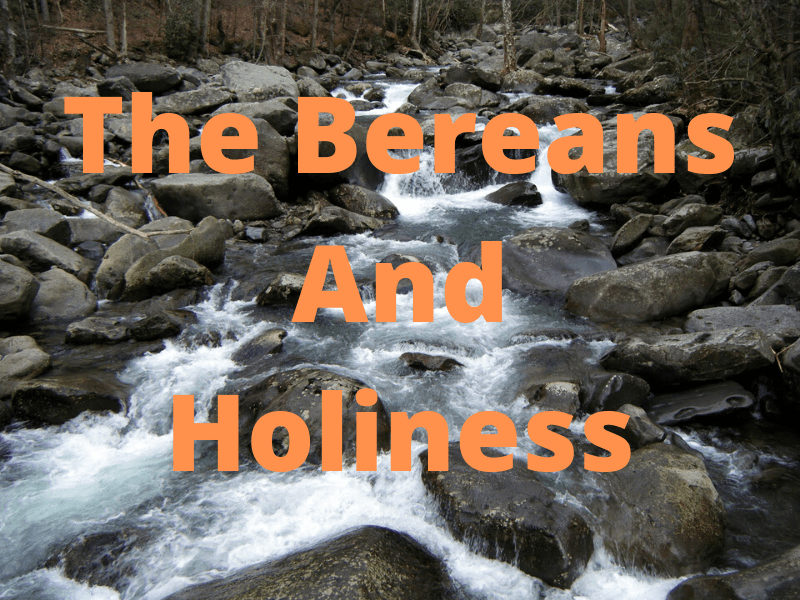 When I was a pastor, one of my most frequently scriptures I quoted is found in Acts 17:11.

Acts 17:11 These were more noble than those in Thessalonica, in that they received the word with all readiness of mind, and searched the scriptures daily, whether those things were so.

Those of Berea received the message that was preached with the mindset that they wanted to know the truth, and then verified it as truth. Our attitude towards the message of God is so important.

I asked Br. Mike Shaffer, pastor of Lighthouse Full Gospel Church to share his thoughts on this verse as it concerns Holiness. Here is what he said.

In consideration of the text before us we see the message delivered of the disciples must be considered first in the light of the historical context.

We find Paul accompanied by Silas in his second missionary journey.

Acts 15:40 And Paul chose Silas, and departed, being recommended by the brethren unto the grace of God.

They were seeking to be led by the Spirit to the region where the Spirit desired them to travel.

Acts 16:7, After they were come to Mysia, they assayed to go into Bithynia: but the Spirit suffered them not.

Their path was directed into another direction.

Acts 16:9, And a vision appeared to Paul in the night; There stood a man of Macedonia, and prayed him, saying, Come over into Macedonia, and help us.

From this call we see the guiding hand of the Spirit of God directing the steps of the missionaries on their journey.

Arrival at Philippi soon leads to imprisonment. Their courage is displayed from the prison cell, praying and singing praise to God in the cell.

Acts 16:25 And at midnight Paul and Silas prayed, and sang praises unto God: and the prisoners heard them.

This conflict and their example of courage leads to the salvation of the Philippian jailor and his house.

Lessons are to be considered here as we think of the statement, Where God Guides He Provides.

Where God Guides He Provides.

Conflict and crisis times are often the method of fulfilling the purpose to which we are called.  The calling of the Spirit was clear, come over and help us.

The crisis was not foreseen, but when it came, grace was present to guide through the maze. They came out to the other side of great victory.

The message of the missionaries is clear:

Acts 17:2-3 And Paul, as his manner was, went in unto them, and three sabbath days reasoned with them out of the scriptures, 3 Opening and alleging, that Christ must needs have suffered, and risen again from the dead; and that this Jesus, whom I preach unto you, is Christ.

Christ must have suffered, (the Lamb of God slain from the foundations of the world).  Christ died. And Christ has risen again from the dead.  Him I preach unto you.  This message is still the foundational message of the New Testament Church.

This historical background brings us to Acts 17.

With the arrival at Thessalonica, we find that there was the synagogue of the Jews.  Here is where we are introduced to several different groups of individuals:

It is very similar today in many places. The message is delivered, and while the names may change, faces may be different, individual response to the gospel message, differs.

The message brought the conflict.

Greece was like the Roman Empire, polytheistic in their view of the gods.

When we bring the singular message that there is none other name given whereby we must be saved, the name of Jesus, the cause for conflict is present.

Acts 4:12 Neither is there salvation in any other: for there is none other name under heaven given among men, whereby we must be saved.

We have two cities presented, Thessalonica and Berea.   In both cities, the crowd will be similar in nature.  The synagogue will be similar as well.  The message will remain unchanged.  We see again the same pattern: Conflict and Courage, antagonism verse acceptance.

Personalities may change, but the message remains the same. It is the individual response to the message which often determines the outcome and results of our message.

At Thessalonica the personal response is different. There is antagonistic rejection of the message.

Arrival at Berea we find receptivity of the message and a willingness to receive.

This reception was not without concern; however the path chosen to follow is the critical path for us to continue to follow today.

The time at Berea is given as three Sabbath days of reasoning with them out of the scriptures.

The message is followed by a method.

The method is the presentation of Christ from the Scriptures.  The term reasoned indicates Paul’s effort to persuade those in Thessalonica of Christ.  This reasoning was rejected by the Jewish leaders.

At Berea, the message is delivered again in a reasonable method. Those in Berea respond differently; this method is to be noted:

They RECEIVED the WORD, with all READINESS of MIND, and SEARCHED the SCRIPTURE daily whether those things were so.

Received the Word, and were of a ready or open mind to the message, but the criteria of proof, after we have been open and listen to what was delivered or brought, must be to take what was brought and delivered, and put it to the test of the text, the Holy Scriptures

The Scriptures, the Word of God is the final authority in all matters of life, conduct and belief.

For those at Berea, the historical point must be understood.  They only had the Old Testament Scriptures.

Nobility is shown in the saints at Berea.

The Method they chose was to hear, receive and then test the truth they had received by the Scriptures.

For the believer of every generation, the Method is still the same.

What we hear must be balanced according to the Scriptural text.

The Means of proof is the Scripture.  I am reminded of Isaiah’s words:

Isaiah 8:20 To the law and to the testimony: if they speak not according to this word, it is because there is no light in them

In our endeavor to search out the message, proper employment of the means is essential and absolutely necessary if we are to arrive at a correct conclusion in our beliefs.

This path of proving will be certain to allow us to arrive today at a proper destination in our beliefs.

Either written in black and white, or presented as a principle, the search of the Scriptures, and our diligence to follow, will speak of our neglect or our nobility.

These were more noble, can this be said of us today?

Many claim the leadership of the Spirit. Sadly, the path and the results which follow from them are contrary to the Scriptures.

Our search for reality will end in parallel with the text of truth if we search diligently whether these things are so.

The Message is unchanged, the Method and the Means are central to our proofs that this is the Christ.

This article was written by Pastor Mike Shaffer. He pastors Lighthouse Holiness Church in Roanoke Virginia.

I accepted Jesus Christ as my personal Lord and Savior in march of 1984. I was in the Navy at this time. It became my greatest desire to draw closer to God. Since that day I have been led by God's Spirit and the scriptures to live a life of Holiness. Holiness is not a bunch of rules, but rather it is the conviction and desire that I am pleasing to God in my life. These convictions are then what set the boundaries of my conduct and actions in life.

link to How Do I Become Holy

Once we have been converted, we are made Holy and begin to learn to express God's Holiness. day by day! "Holiness unto the Lord," is the established and therefore the eternal standard for every saint

Continue Reading
link to Why We Should Pray For America

The church must fervently seek Him as we have never sought Him before. If we don’t, we must prepare ourselves and our children to suffer the extremely adverse consequences that will take place soon

Within our society today, the term "Holiness" has simply become a general expression for a "Christian" life.

This "Christian" life is lived daily without much thought ever being given for what the word "Holy" really means.

Yet God commands us to be Holy, even as He is Holy.

He wants us to be Holy. He will make us Holy.

In order for this to happen, we all need to simply believe and obediently accept each word God has spoken.

It is our prayer that through the studying of the Word of God here, each one that reads these articles will come to the conviction that:

(2) There is Joy in being Holy

(3) There is great faith in living a Holy life.

Let's be what God has called us to be - Holy.

Have a question you would like us to answer? You can submit questions to us anonymously by clicking the Just Ask Button.

We would also love to hear any comments or questions you may have. You may contact us directly by emailing us at [email protected]

PRACTICAL HOLINESS, or more appropriately “PERSONAL HOLINESS” is where we walk our life as close to God as we are called by God to walk.  This applies first internally, then externally.

Here are a few observations that should be noted.

This is why God instructs us to “Be ye holy; for I am holy.”